Justin and Joanna’s wedding was a little different than other weddings I’ve photographed. First off, they’re bass players who’ve each played in good rock bands. When I first met them and they told me they played in bands, I thought to myself, “Oh, what a surprise, more rock musicians in Seattle.” I have to say that many people I know in Seattle have either played in a band or have a friend that plays in a band. The number of musicians in the coffee capital is probably on par with the number of photographers! There are so many people into the arts scene which is a great thing! But when I listened to their bands online, I was quite impressed!

Another part of their wedding that was different was that they didn’t use a knife to cut the cake. They used a sword! Justin is a Navy officer and was dressed in his Navy formals. Getting a piece of cake with a little butter knife wasn’t going to cut it for this top brass member.

They had their wedding ceremony and reception at the World Trade Center in Seattle. When the reception was starting to wind down after midnight, Justin and friends had the main band take a breather while they took the stage and rocked out. He sang a song to his bride and then her friend dedicated a song she played with her guitar. It was the best way to cap off two bass players’ wedding day in Seattle.

Best wishes to this bride and groom as they start their marriage off with a move to Boston where the groom will be attending a great college – M.I.T.

The flowers were provided by Sublime Stems. 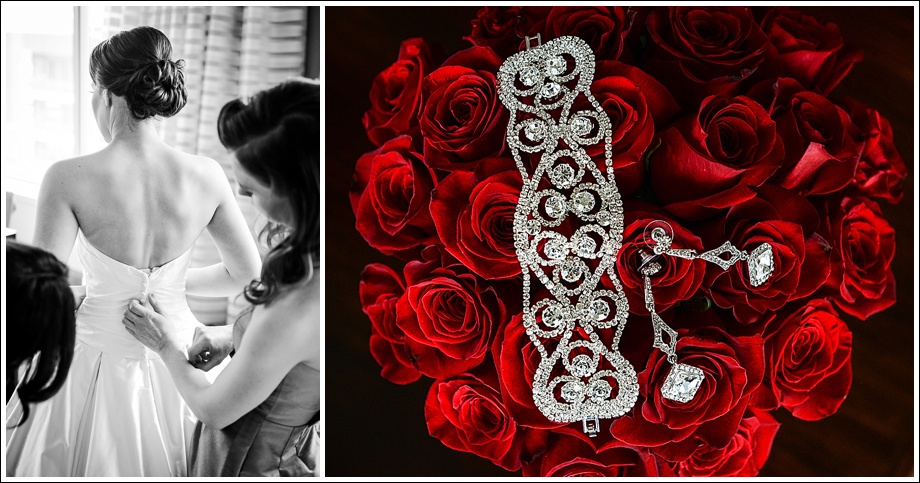 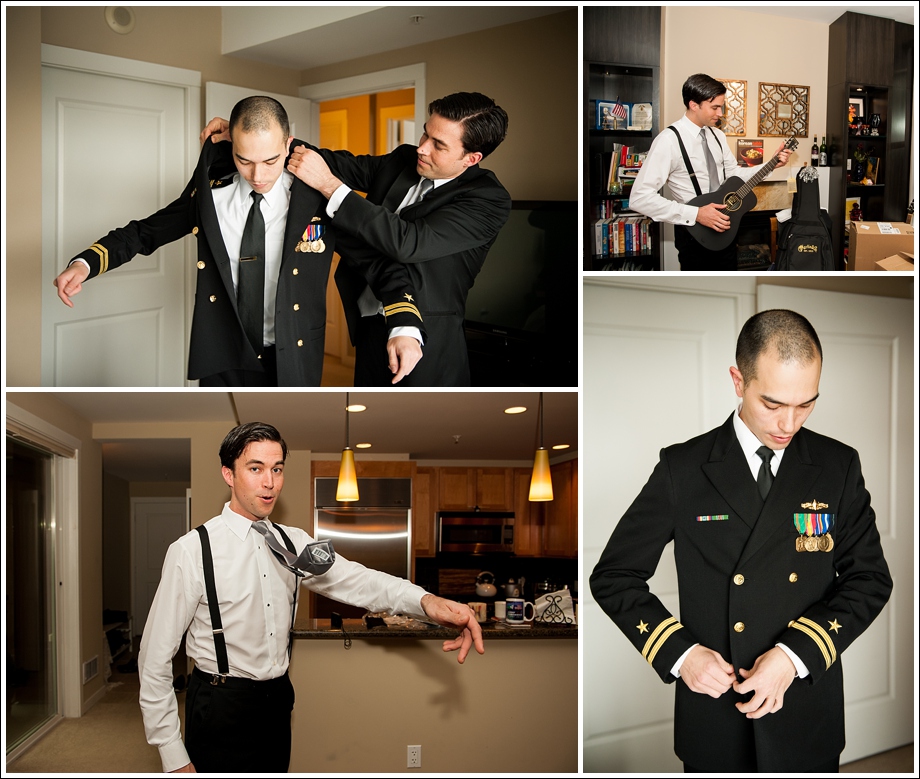 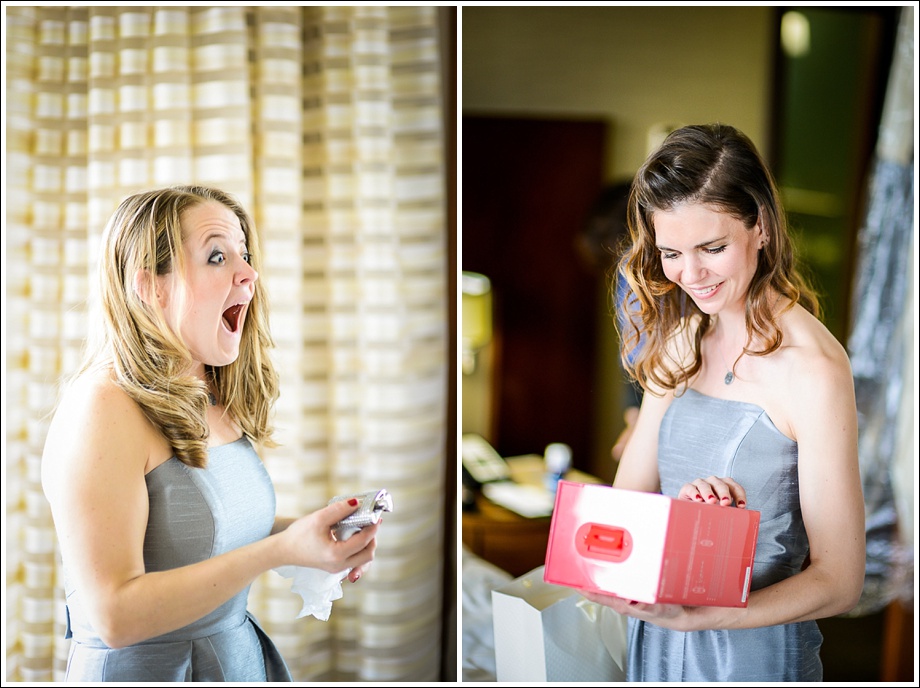 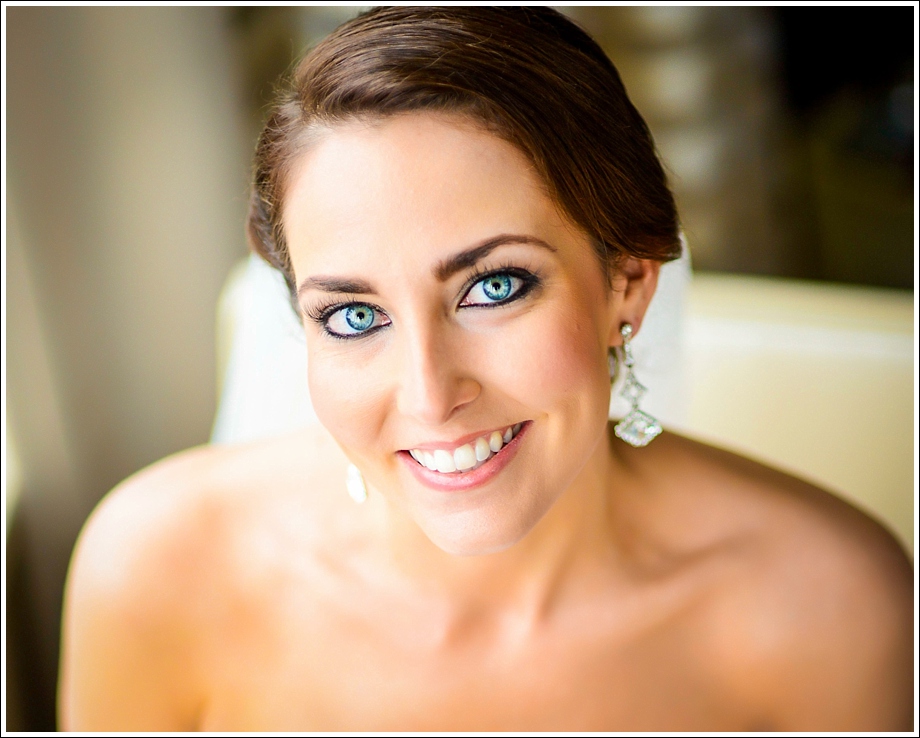 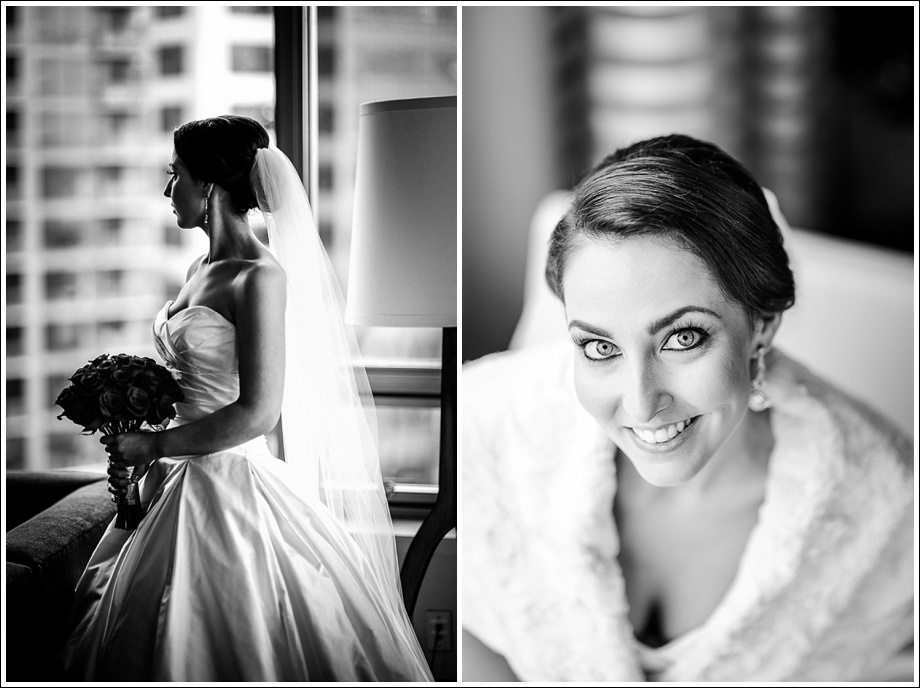 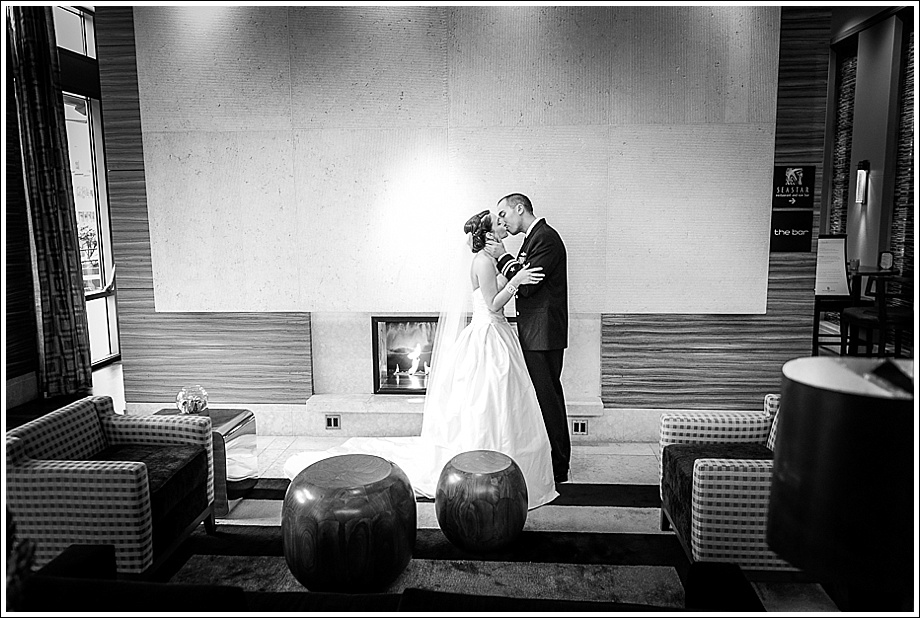 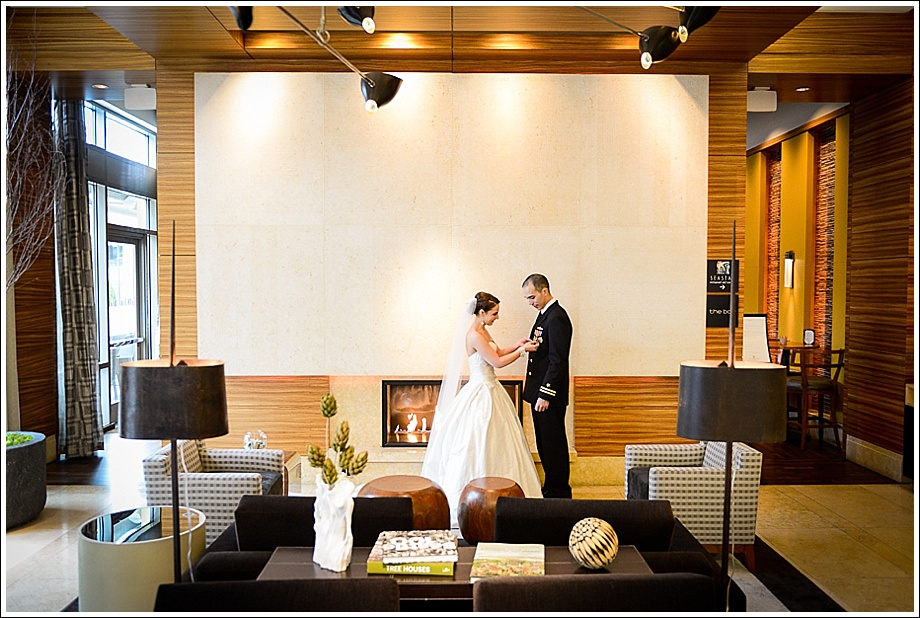 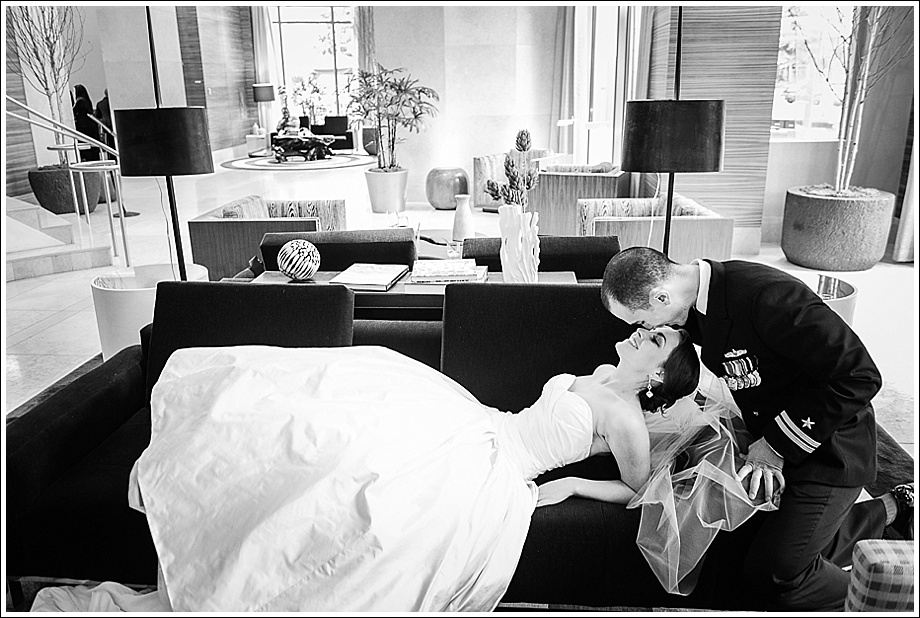 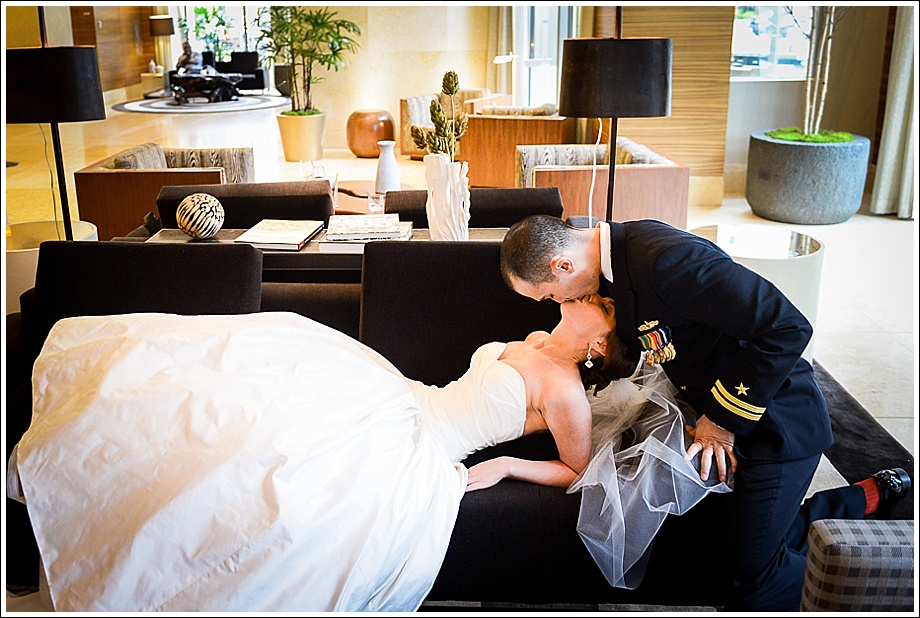 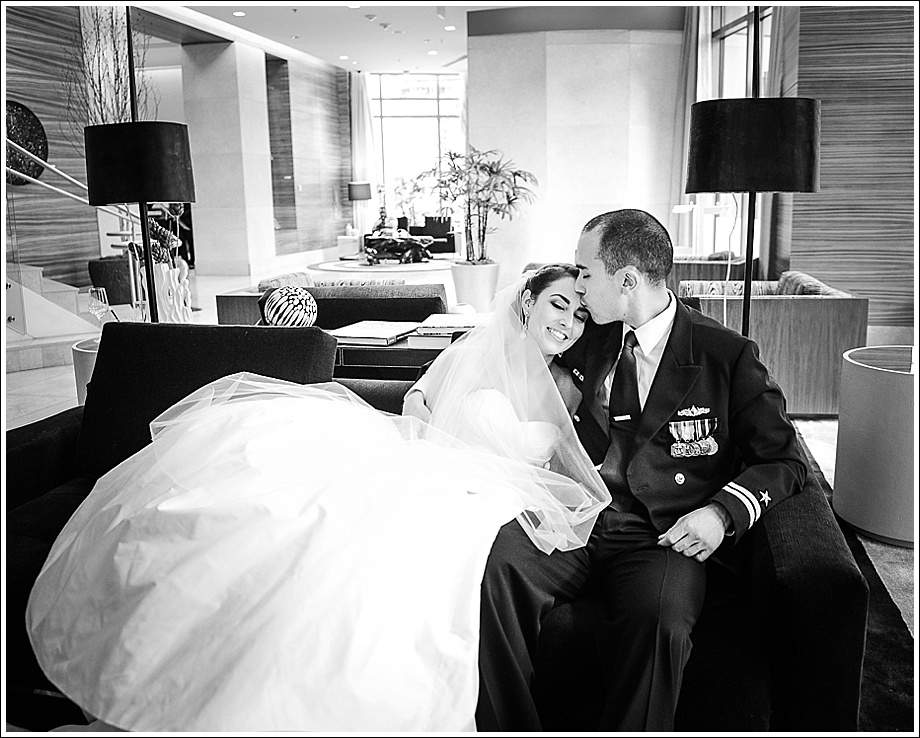 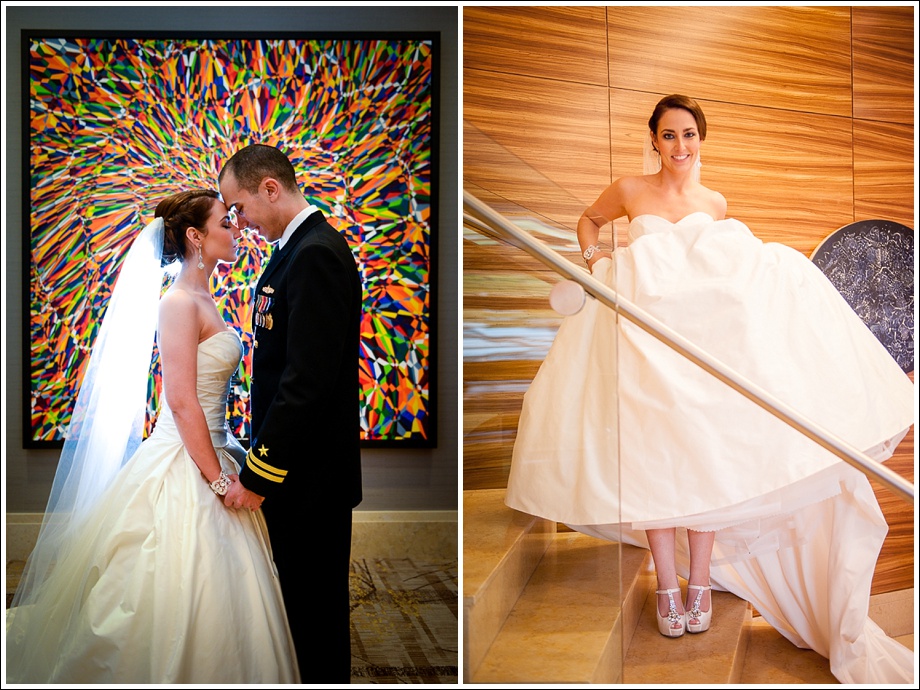 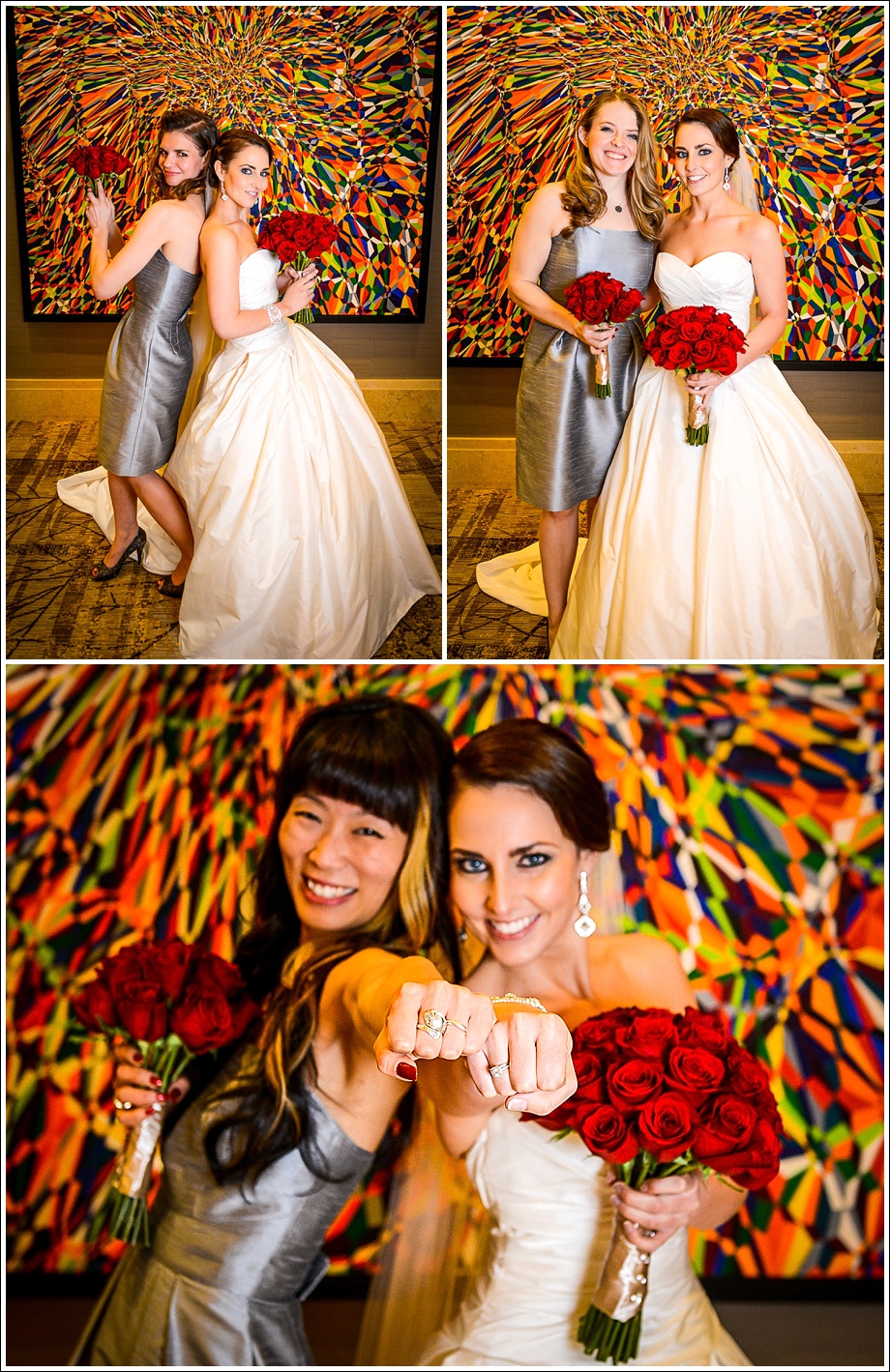 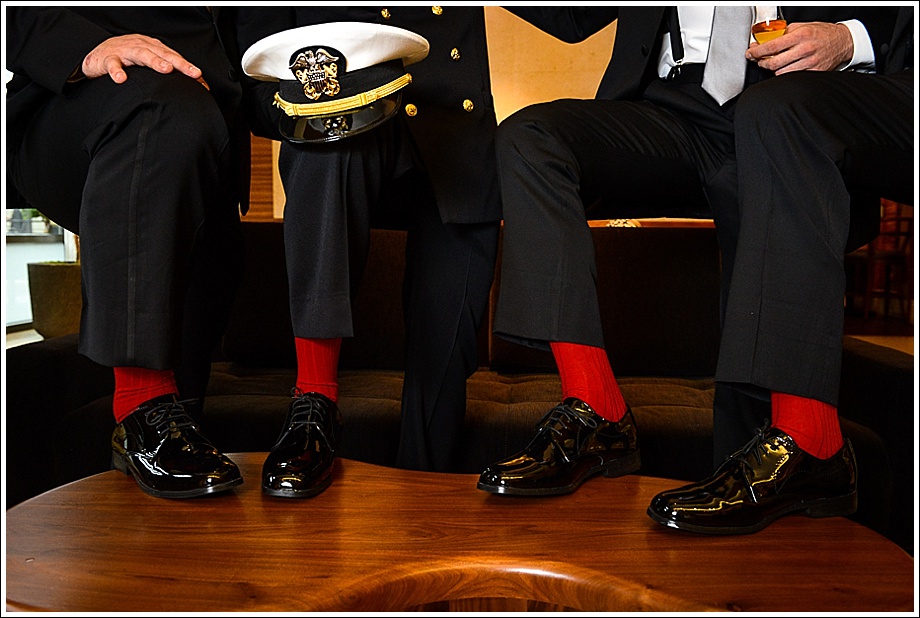 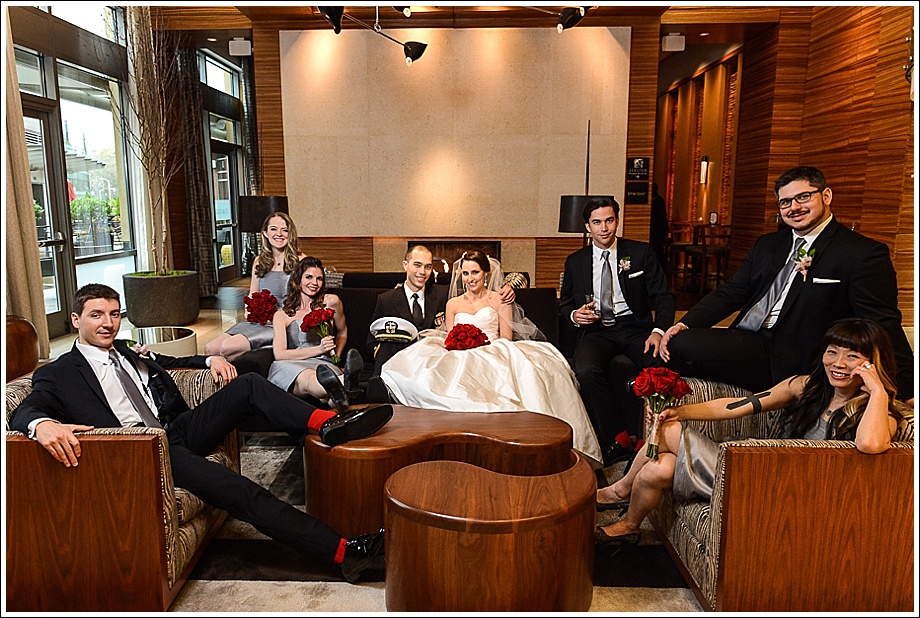 Thanks to my highly talented 2nd photographer, Tara Brown, for assisting me with this wedding. She was able to capture some great moments while I was busy capturing other great moments. This is why I highly recommend two photographers to capture a wedding day. With two photographers, a couple will get the best angles and will have a much greater chance of getting those beautiful moments captured that are happening all at once. 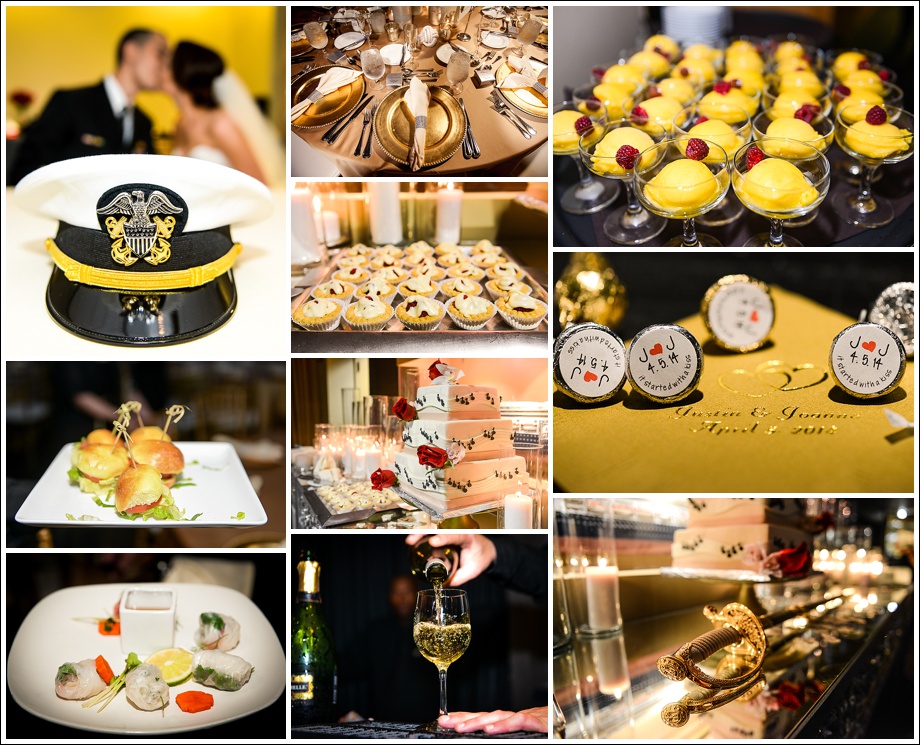 It rained a little bit on the wedding day but it had stopped during the time I was able to spend photographing the couple at the Pike Place Market. So I figured that I would throw some rain into their photo to tell the story that it did rain on their wedding day and for them to remember the city of rain while they are enjoying sunnier days in Boston. 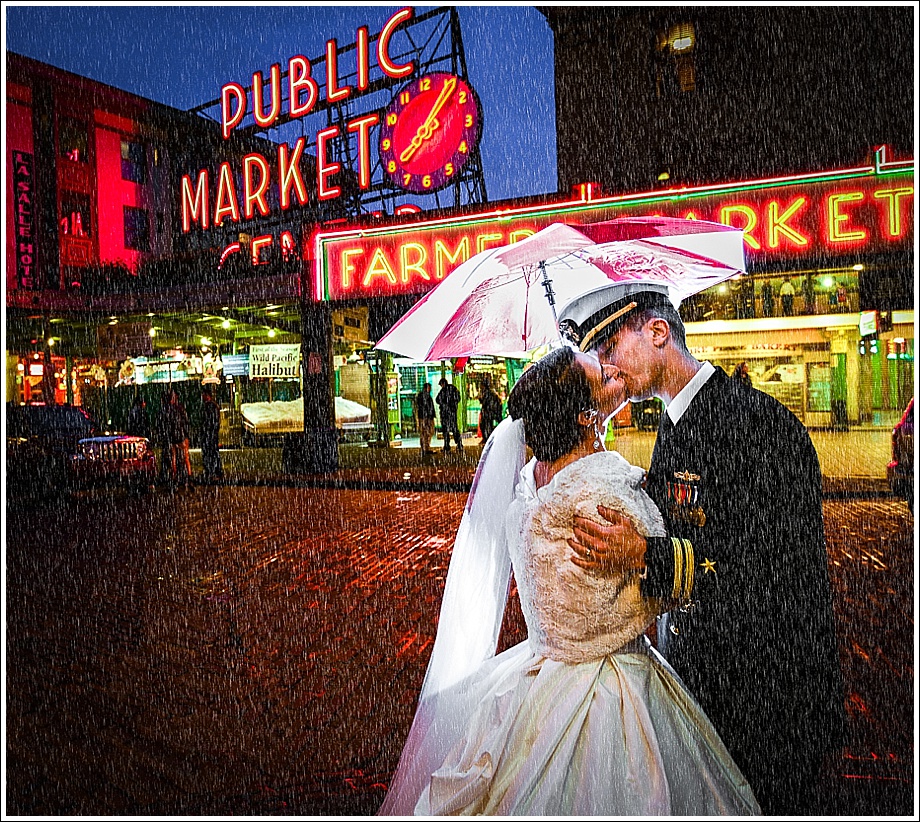 The Pike Place Market has been around for a number of years. I thought it would be a good idea to capture it in black and white, especially since the groom was wearing a timeless Navy officer’s suit. It reminds me of the classic sailor kissing a nurse in New York’s Time Square, only this is the Seattle version. 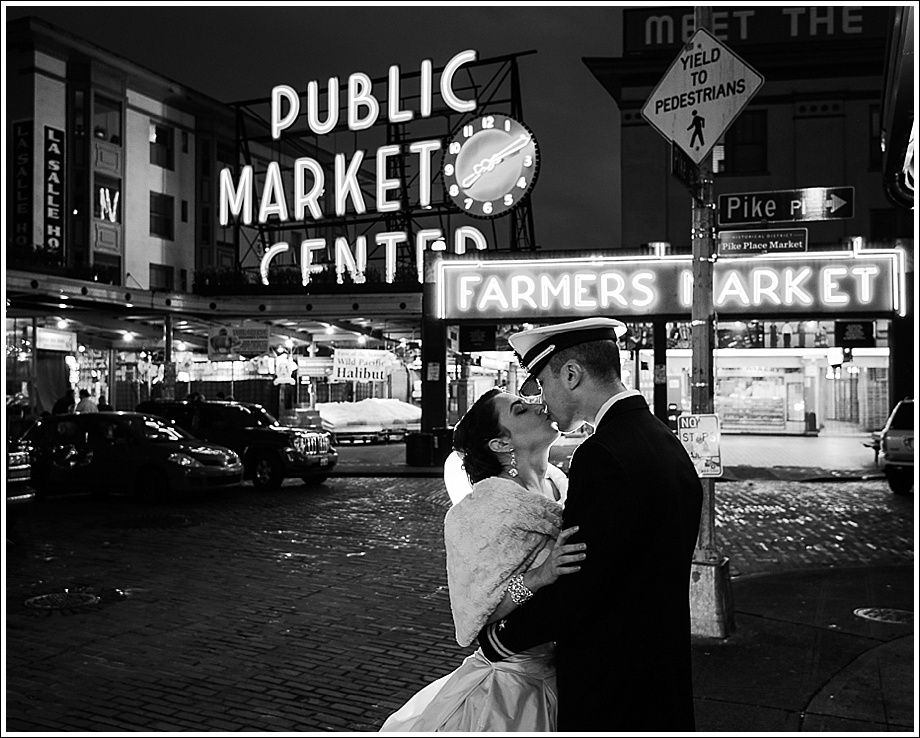 I wanted to take the couple to another famous landmark of Seattle so they would have some classic photos of Seattle to take with them to Boston. I thought the Experience Music Project (EMP) would be a good location since it has the Space Needle nearby and would be a fun reflection to capture on the building’s wall. The image in color below was also photographed at the EMP. 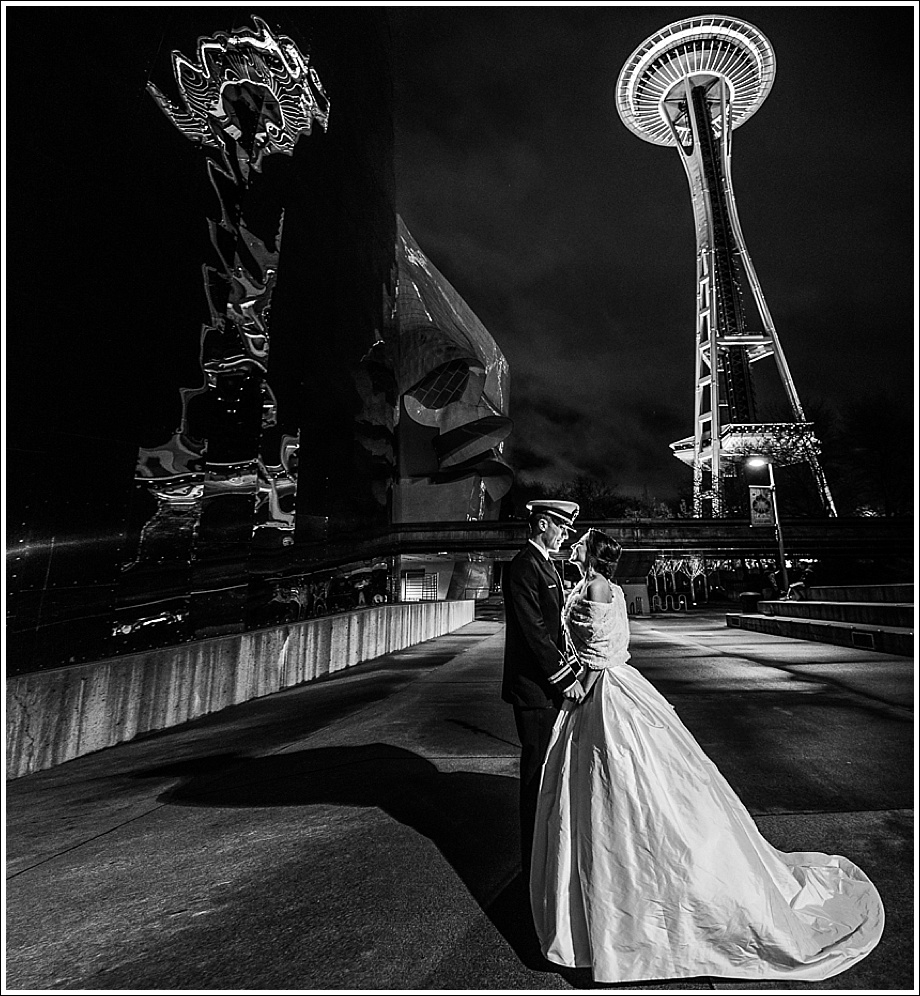 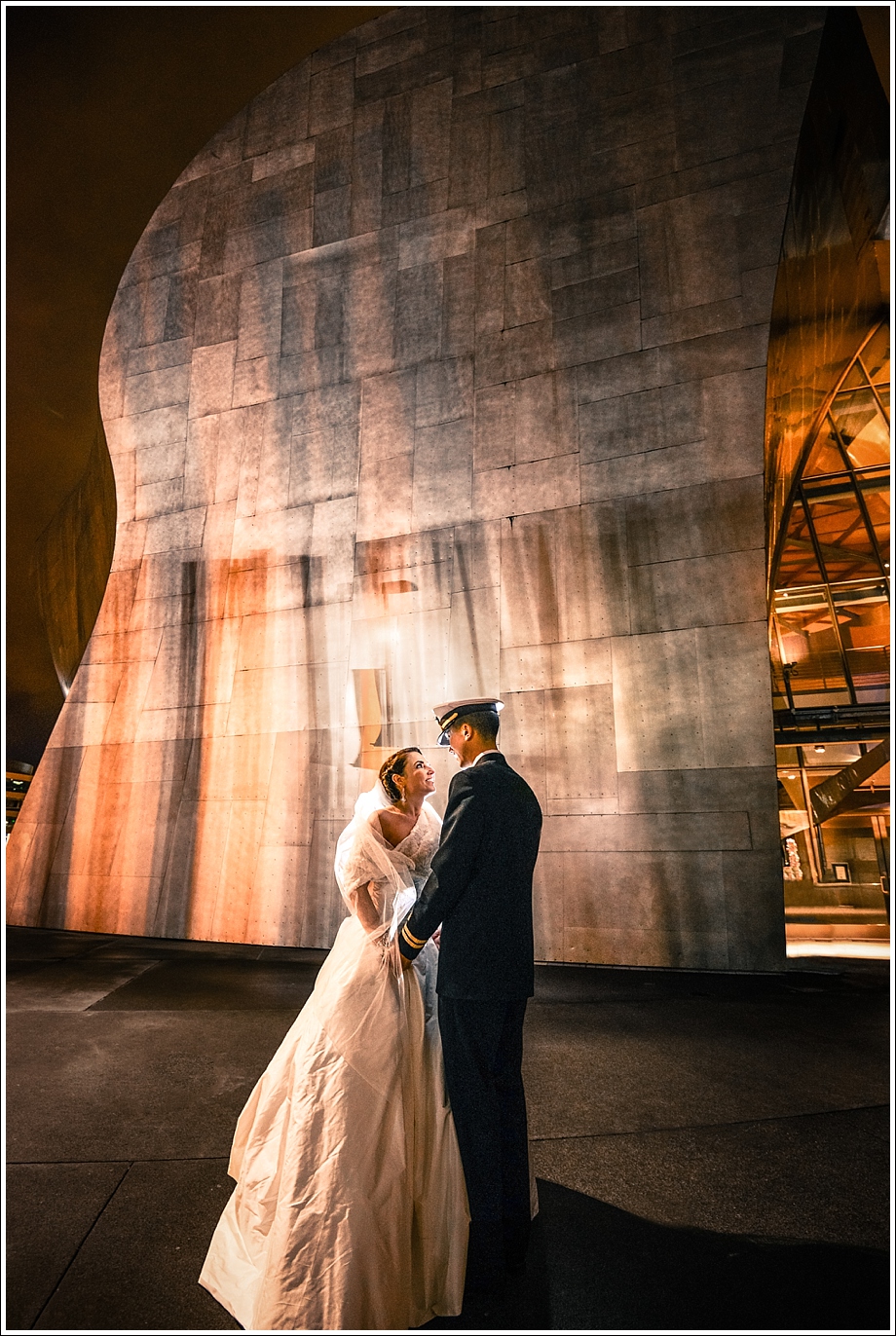 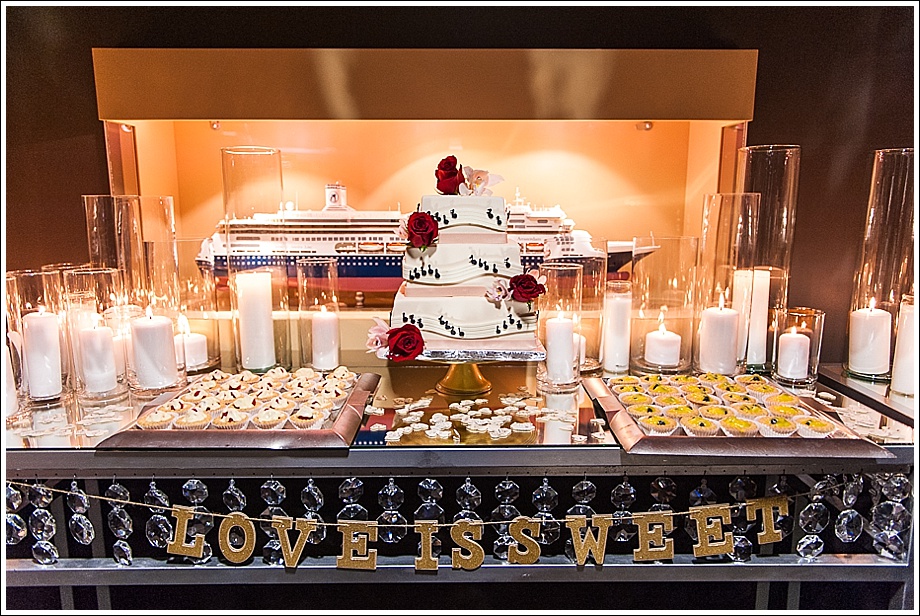 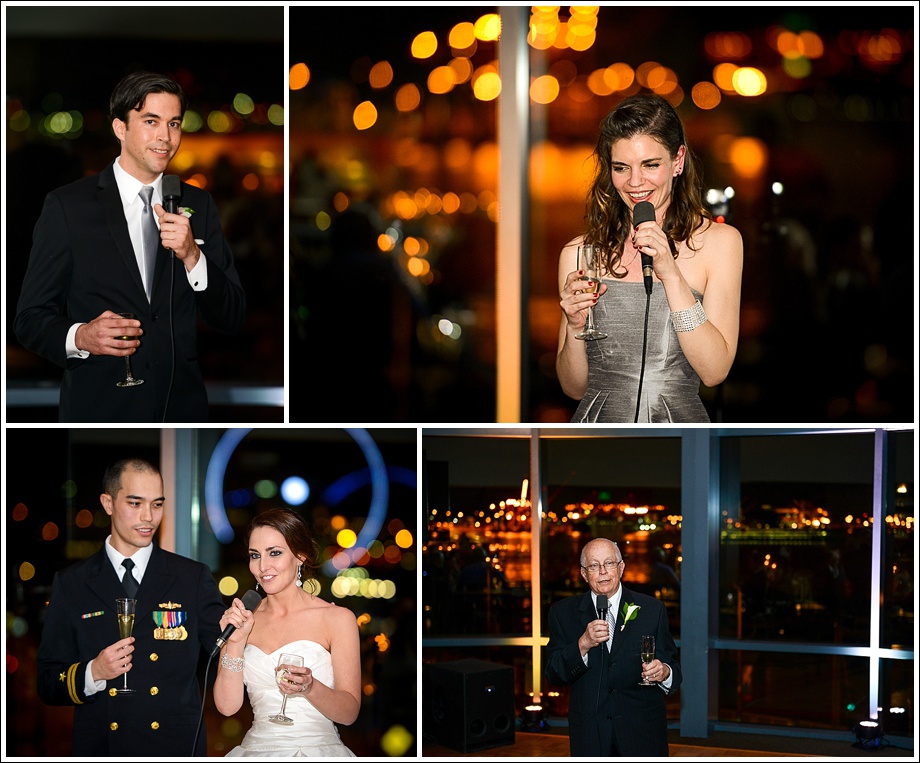 My first time photographing a couple cutting the cake with a sword! 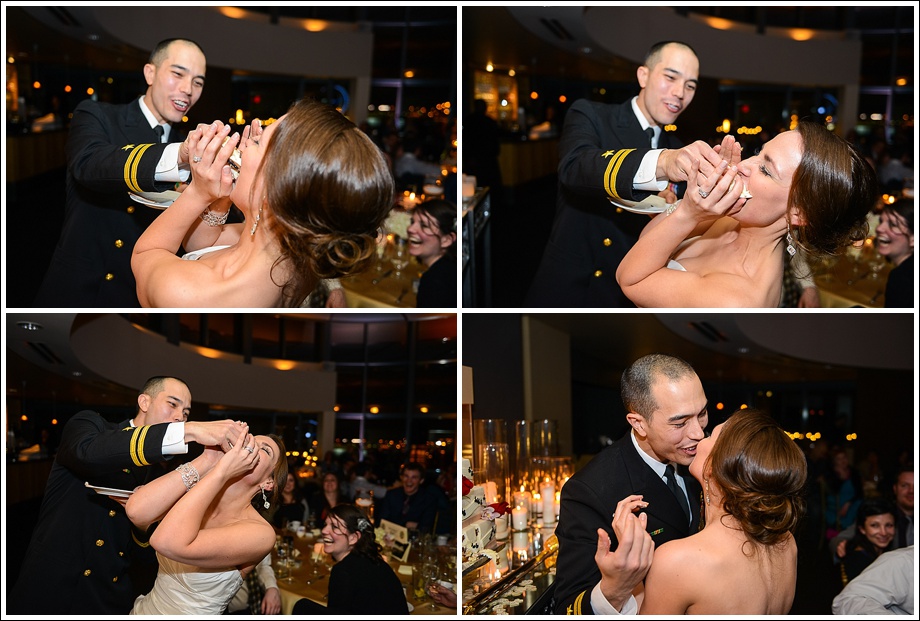 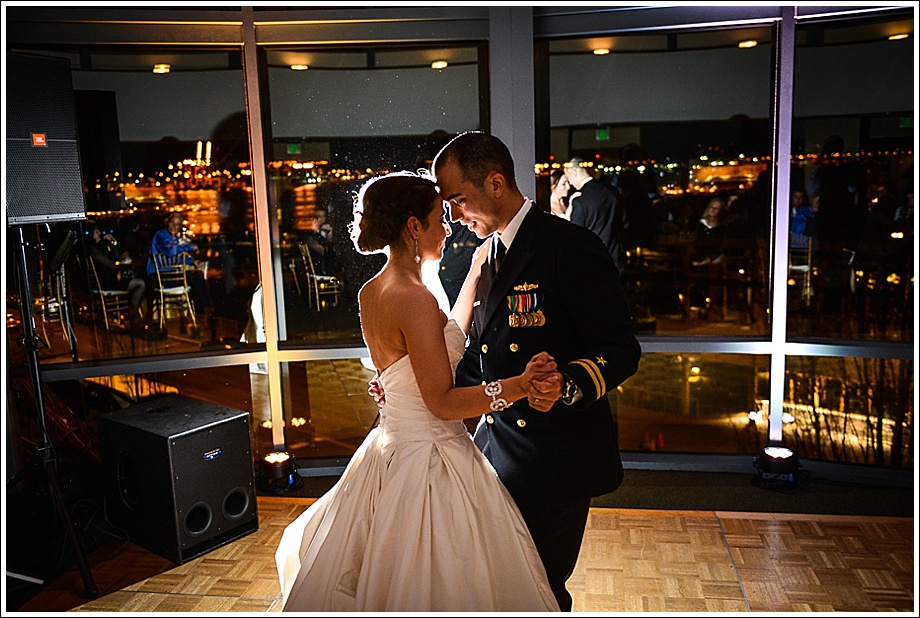 The band they hired, Michael Benson Band, was very talented! I had fun eating dinner with them at the reception. I noticed their fun comradery at the table and figured they had been together for a while. They said they had been playing for over 30 years! A couple of the members knew my former private trumpet instructor from my high school days! They were a lot of fun! 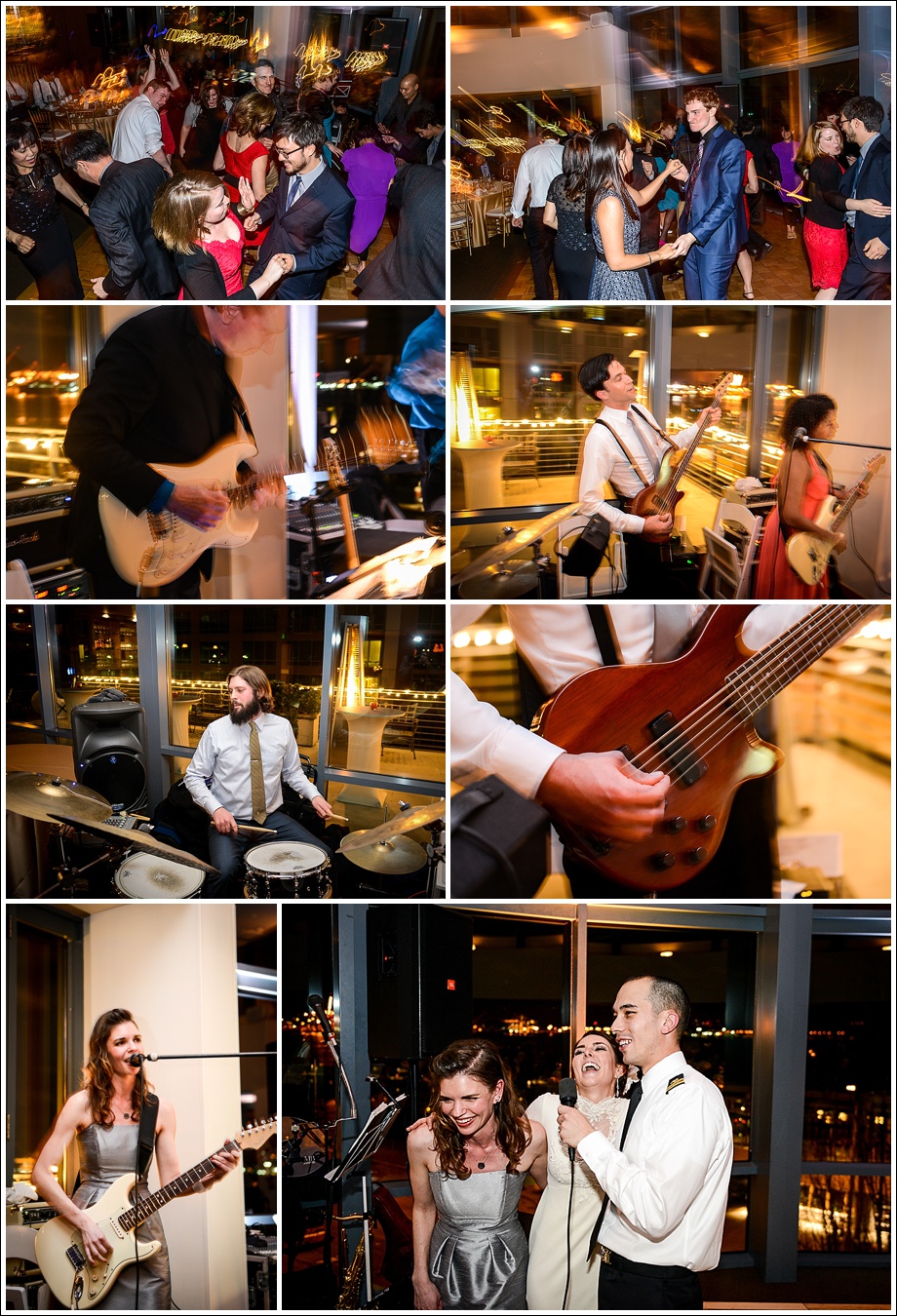 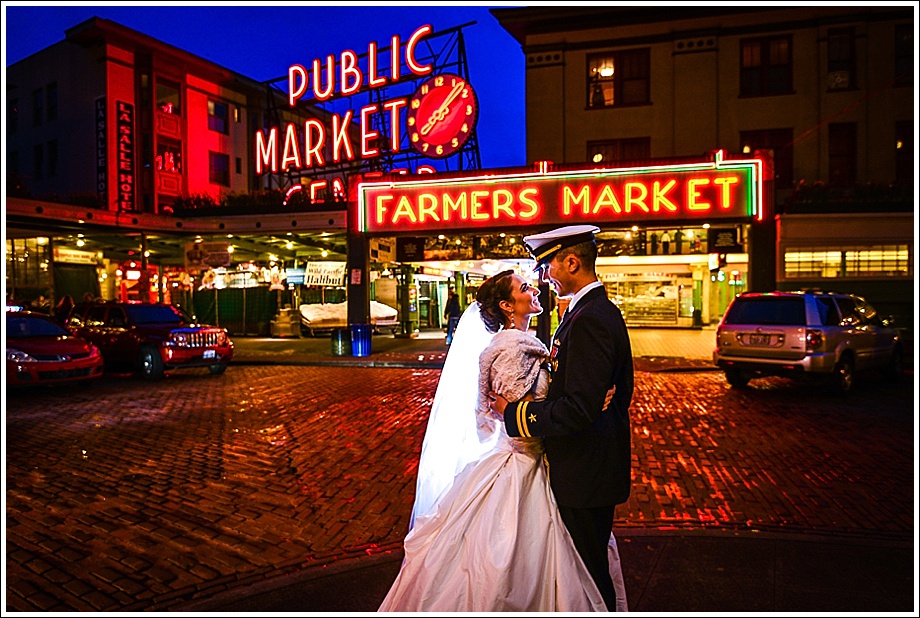