I never thought that the photo I took of the blood moon over the tulips near Mt. Vernon would go viral like it did. I didn’t even consider driving up there on April 14th until a friend, David, said that he was going to be up there during sunset.

I had just gone to the tulip fields for a scouting mission on April 10th and thought the fields looked good in color but most of the tulips were still too small. However, I did find this field that looked really good…. 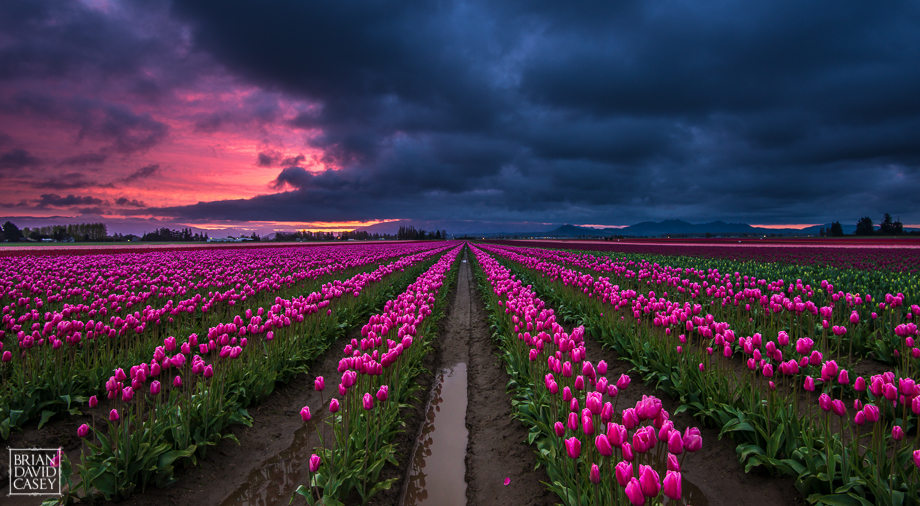 I figured it would be about a week until most of the tulip fields were at their best. But I knew that David is a photographer who knows what he’s doing when it comes to getting great shots! I met him while doing a shoot of the Seattle cityscape from Kerry Park during a January sunrise. He was one of the only other photographers at Kerry Park at the time. We were pleasantly surprised at what a beautiful sunrise was taking place before our very eyes. We had both lamented about how many times we had gone out to get good photos in 2013 but were disappointed due to bad weather or lackluster light and color. After seeing the January Seattle sunrise unfold in front of us, we knew that 2014 could be our year for some great imagery. Little did I know that our sunrise Seattle image would be seen and shared by thousands of people. Here is my photo of it: 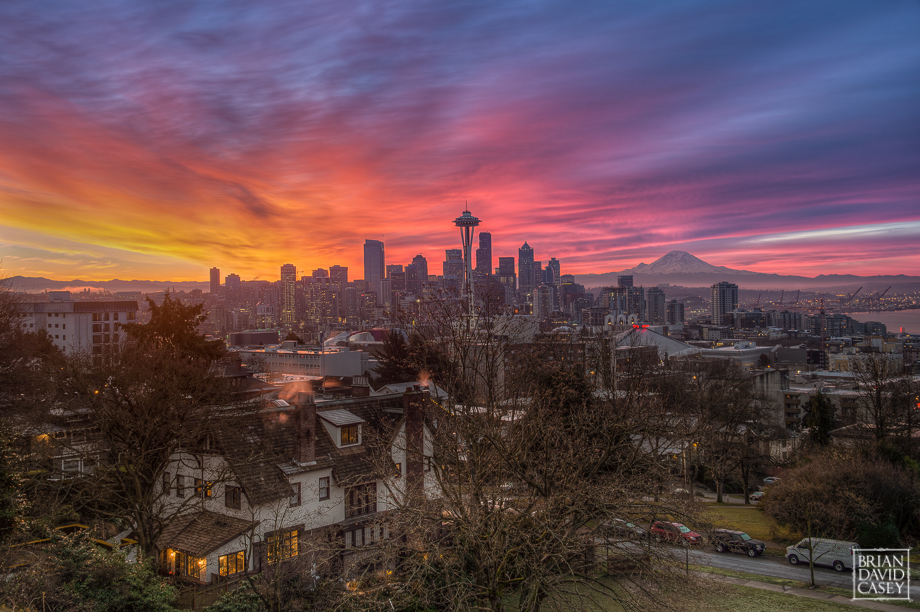 I knew I had to join David in Mt. Vernon or I would probably regret missing out on an amazing scene. Oh how this would have been so true if I decided not to drive up north to the tulip fields.

I arrived at the RoozeGaarde in Mt. Vernon just 15 minutes before closing time (7 PM). I hadn’t been there for about 10 years and figured it was time to visit it again. The last time I was there, I was using an old film camera, the Nikon F3 and had put slide film in it. Here are a couple of photos I took with that old Nikon: 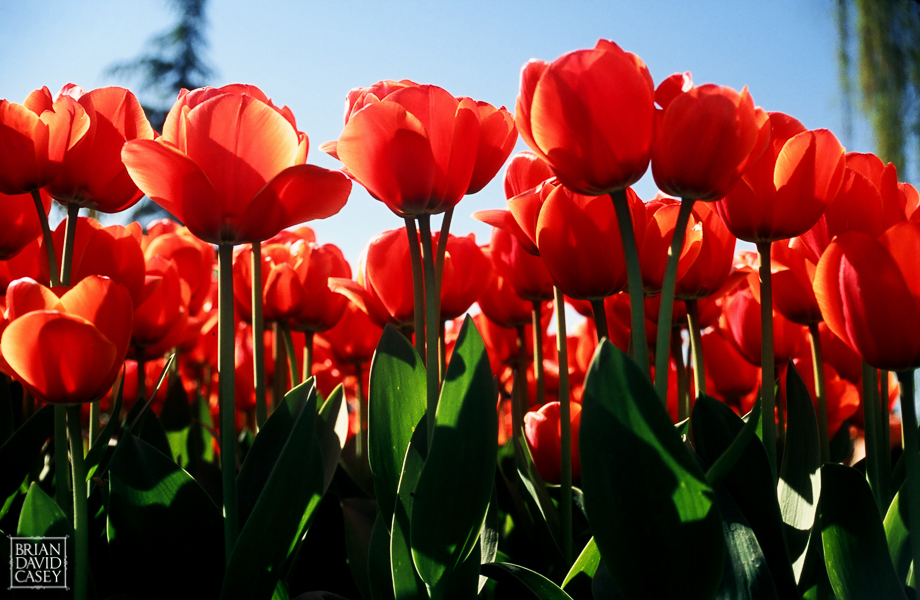 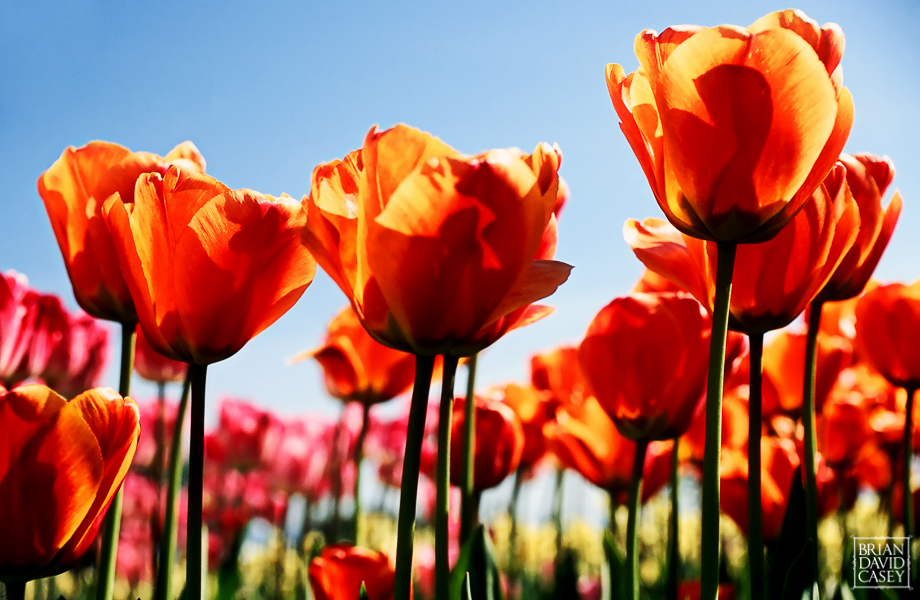 This time, I got out my Nikon D800 and decided to take similar shots to the ones I did 10 years ago. The Roozengaarde is a beautiful place to go for tourists but as a photographer, it’s hard for me to find a shot that is appealing. So the only angle I thought would be interesting there would be from below since I always see the flowers from high above in my every day life. Below are a few photos from the Nikon D800 I took there on April 14th: 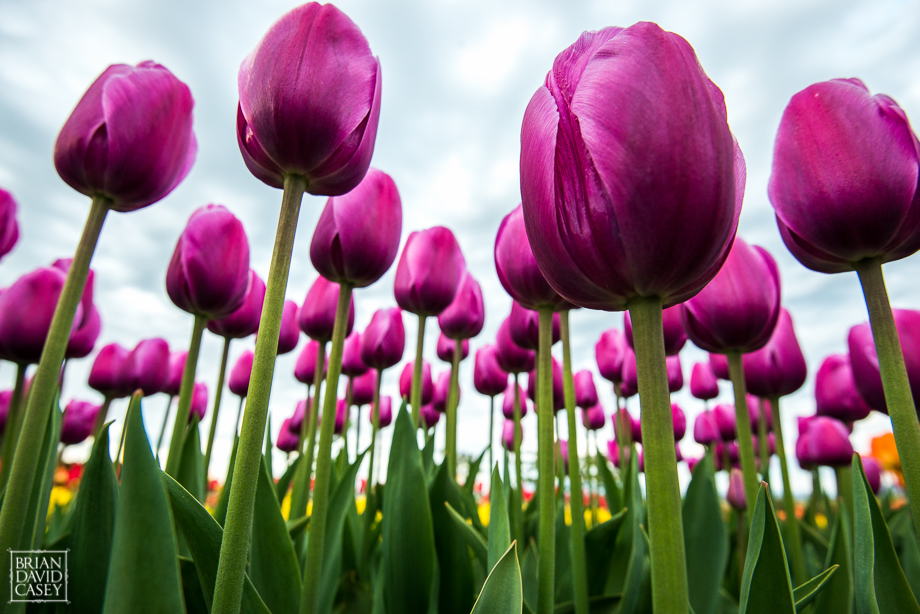 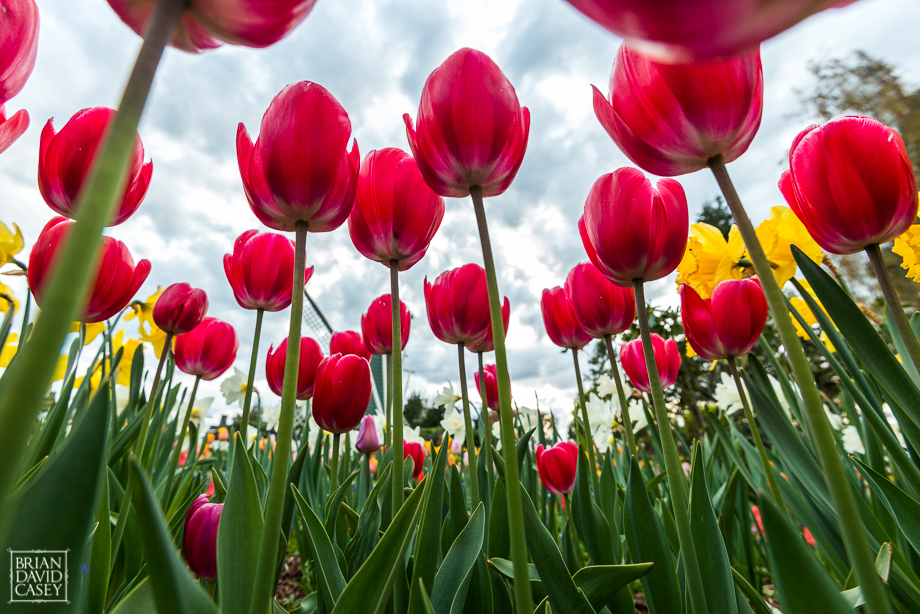 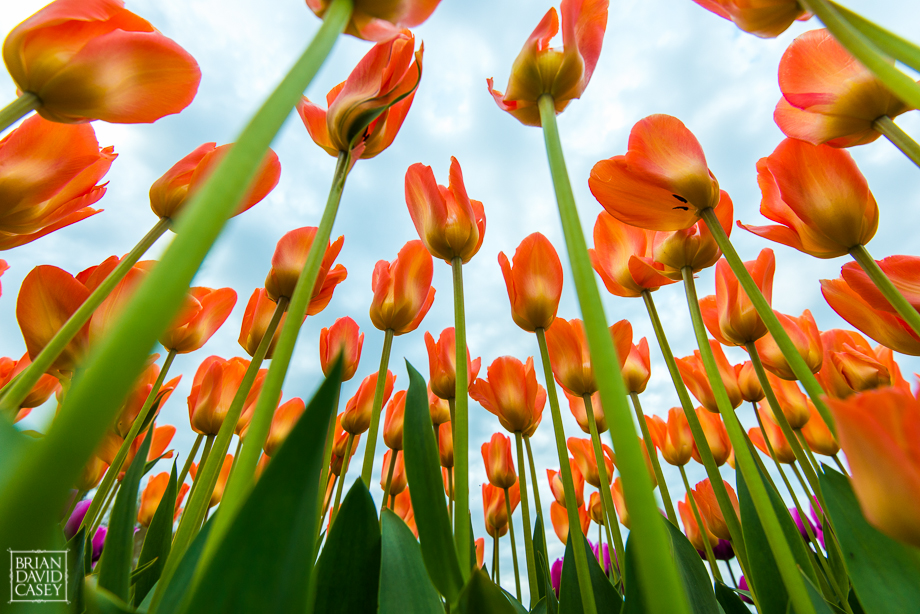 After leaving the Roozengaarde, I crossed the street to have a look at the tulip field there to see if it was worthy of a sunset photo. Not having much time until the sunset, I decided the location would work for me. Unfortunately, David wasn’t able to join me for the shot so I setup next to about five other photographers. One of them had the perfect spot so I did the best I could with the remaining open spots. Here are the sunset shots I was able to get… 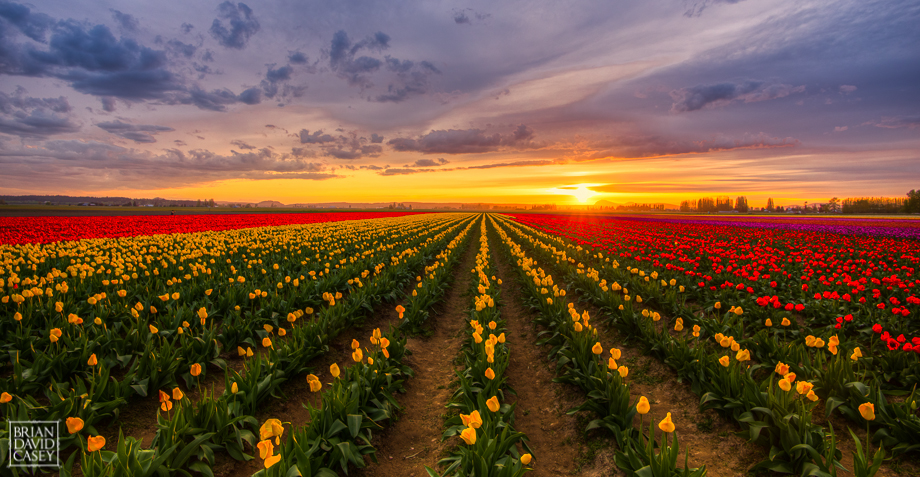 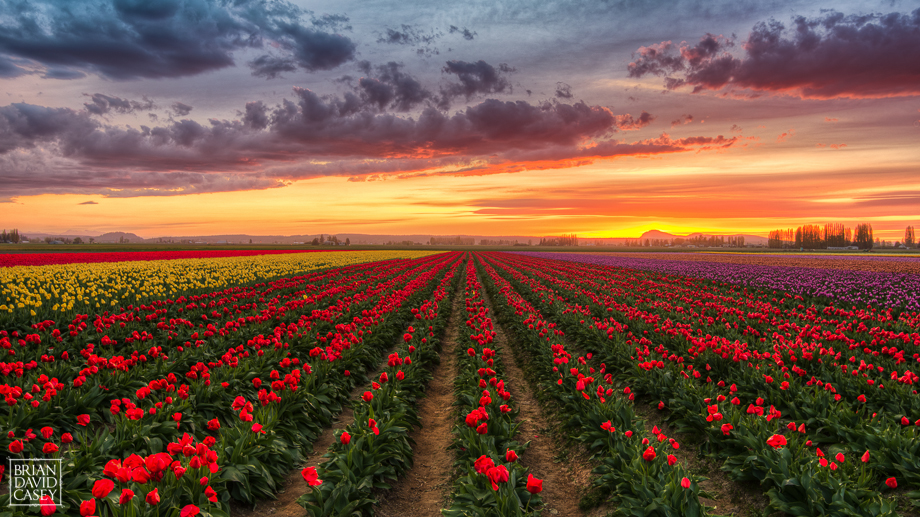 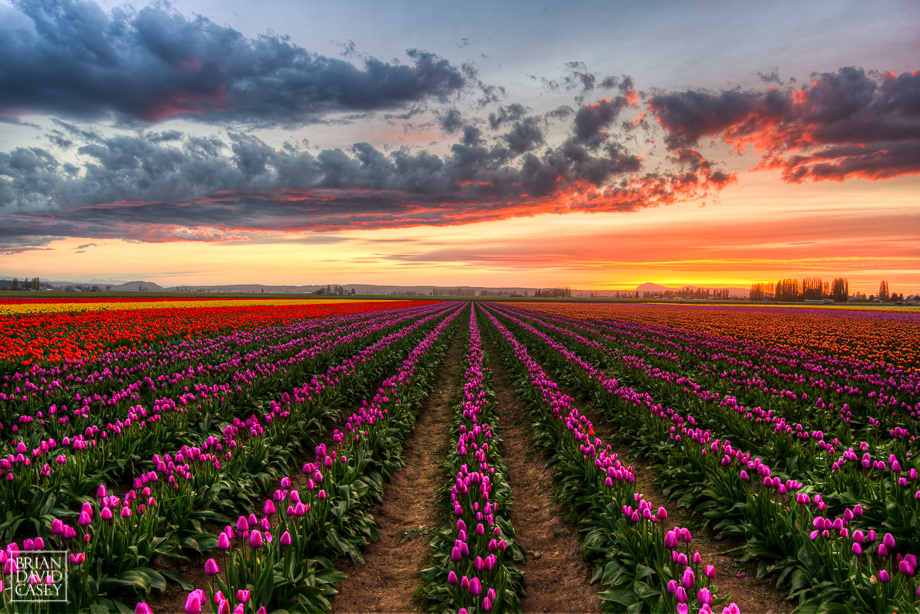 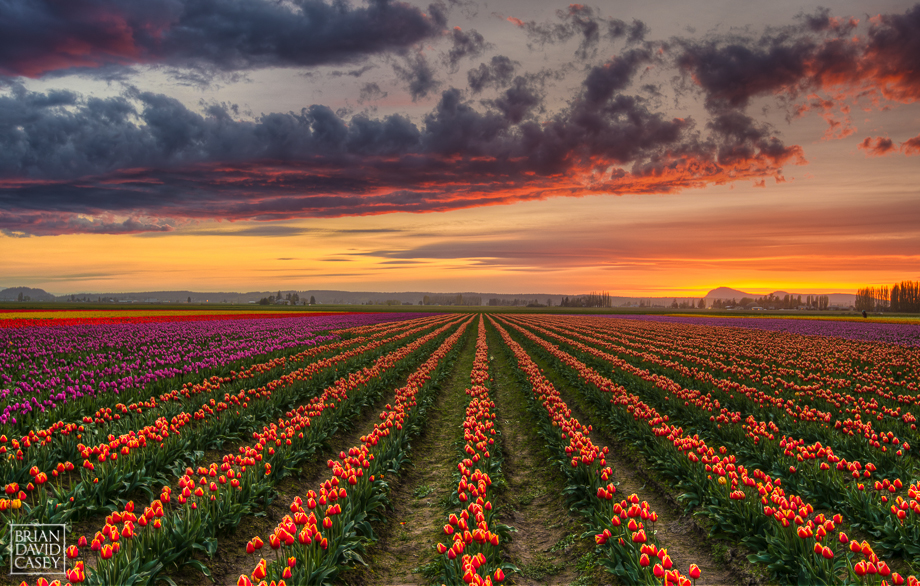 Immediately after the pink disappeared from the clouds, a photographer yelled out, “Turn around and check this out!”. We turned around and saw the blood moon trying to break through the clouds. I quickly grabbed my gear, turned 180 degrees and walked 20 feet to setup my camera with another lens to capture the moon with the tulips. About the time that I got everything dialed in for the shot, the moon broke through the clouds and stayed there for about two minutes and then disappeared behind the clouds for the rest of the night. I was blessed to be able to capture this very rare moment on my camera. 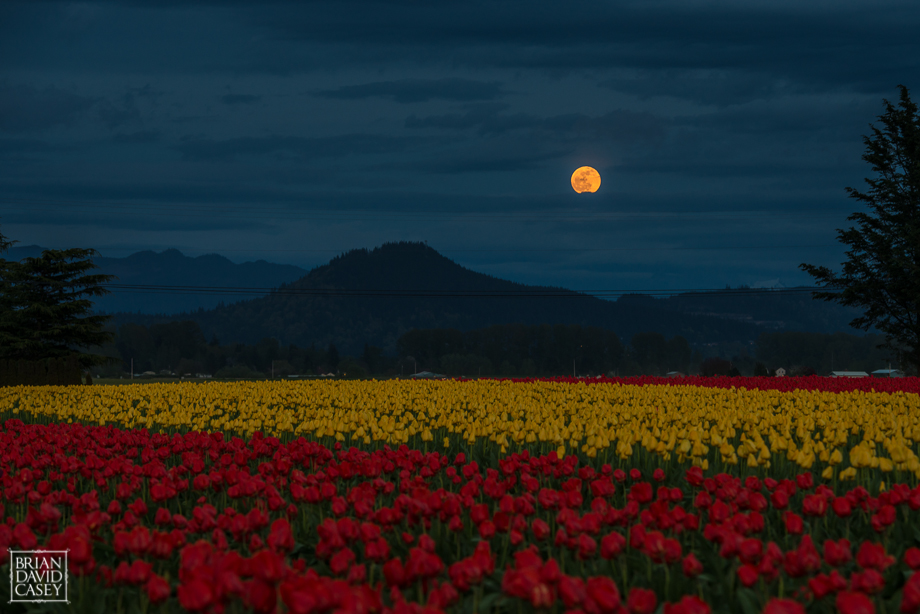